UNESCO include Bistritsa grandparents in the list of world masterpieces 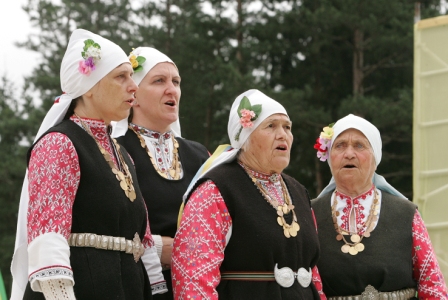 The Bistritsa Babi: a world masterpiece of intangible cultural heritage.
The Bistritsa Babi (Grannies) are the most renowned residents of the village of Bistritsa, famous for their archaic polyphony performances, dances, and rituals from the Shopluk Region. They are currently led by Dinna Koleva. The women in the group are as follows: Krema Gyoreva, Tsvetanka Tsenkova, Evdokiya Batlachka, Gerginka Vayova, Sevda Gergova, Aneta Galeva, Nadezhda Pashaliyska and Galina Taneva.
In 2005, the Bistritsa Babi were inscribed on the UNESCO Representative List of the Intangible Cultural Heritage of Humanity. Their performances are distinctive for their archaic polyphony, dances and rituals from the Shopluk Region.
Diaphony (also known as Shoppe polyphony) is a type of polyphonic singing in which one or two voices build the melody, while other singers hold a monotone, two or three-part drone which accompanies the lead singers. The dancers, clad in traditional costumes, dance the “horo" (a chain dance). They hold each other by the waist or belt and dance in a circle, usually moving counter-clockwise. Despite the variations of steps performed, a specific feature is that the musical and dance rhythms are non-synchronous.
Although the social function of polyphonic singing has changed in recent years, since it has now primarily become a stage performance art, the Bistritsa Babi are seen as an essential component of the country’s cultural life, promoting traditional folk expression among younger generations. The Bistritsa Babi are among the few remaining performers of traditional polyphony and the village of Bistritsa is one of the last places in the country where this cultural tradition has been maintained and passed on down the generations. As Bistritsa is near to the capital city, Sofia, there is a declining interest among young people in traditional folklore. As a result, the once rich repertoire of songs now no longer contains harvest songs, for example. Another reason for the reduced number of songs is that stage performances now are often shorter than they used to be and only the most popular highlights are selected.